Differences between hard and soft density, which racket should you choose?

1717Let’s look at the differences between hard and soft rackets, according to the type of EVA rubber density we use in the StarVie factory and their features in the StarVie 2021 collection models. We present a comparative table from the softest racket (soft) to the hardest racket in the collection (pro). It would be a mistake to say that one type of racket is better than another, because racket choice is something very personal and depends not only on your feelings as a player, but also your type of game, your most characteristic strokes and your physical condition. 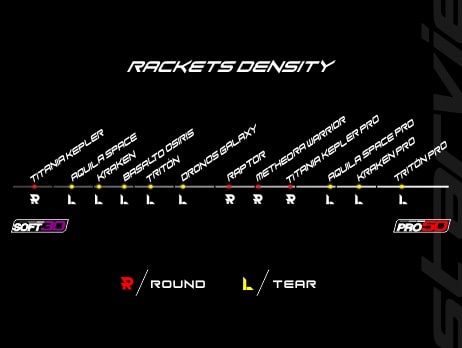 Hard or medium-density padel racket features: this type of racket will give you more control and power when playing your game:

It’s a factor to take into account if you like the sweet spot to be small, as a hard racket will give you a better feeling of balance on the court.

In addition, it’s worth mentioning that medium-density or hard rackets have a rubber density of approximately 50kg per m³, a higher density than soft rackets.

In our new StarVie 2021 padel racket collection you can find medium-density models (hard rackets) providing us with each and every one of the previously mentioned characteristics. These are our models with hard rubber:

Soft racket features (soft): this type of racket will offer you, above all, greater ball output, efficiency when playing each stroke, and a correct absorption of the same.

It’s important to keep in mind that soft rackets give off less as they absorb shots more easily.

On the other hand, soft rackets have different densities to hard rackets, giving us completely different sensations in play. The density of the rubber in a soft racket varies between 18 to 30kg per m³.

In the StarVie 2021 padel racket collection you can find the following soft density rackets:

It’s not that one racket is better than another, but that each of them has certain characteristics that differentiate them. As a player, you’ll have to find the racket that best suits your style of play, the one you feel most confident with and can develop your skills more efficiently.